but not in Milwaukee County 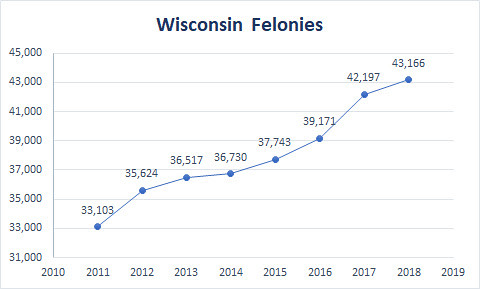 “Wisconsin has the lowest reimbursement rate for private bar attorneys that represent indigent criminal defendants,” the budget notes. “Under our system of due process, everyone has a constitutional right to legal representation yet the low reimbursement rate has caused major concerns as to whether all Wisconsinites are being properly represented.”

The proposed budget would increase from $40 per hour to $70 per hour paid to the private attorneys. The increase would take effect Jan. 1, 2020. After that, the amount paid would be adjusted to reflect inflation.

The Salon will be at noon on Wednesday, March 27, at Riverfront Pizzeria, 509 E. Erie St. A lunch buffet will be available. The buffet will include a pasta dish, pizza, salad, and garlic bread. Vegetarian options will be available. The cost of the buffet is $14. Please make your reservation by 5 p.m. Monday, March 25. (Sorry, no refunds for cancellations made after that time.)

Attendees will have a chance to ask questions and become more informed on each candidate in preparation for the election. Both events are FREE and open to the general public. No RSVP necessary.

Both forums will be at the
Milwaukee Bar Association
747 North Broadway
Milwaukee, WI 53202

The election is April 2.

Get your WJI buttons! Buttons are just $4 each, including shipping and handling! An even better deal – two buttons for $7! Get one of each! (Added bonus – just $3 each or two for $5 at WJI events.)

Wear the #FixtheForty button to let your friends and colleagues know you favor increasing the lowest-in-the-country $40 hourly rate paid to private lawyers appointed by the State Public Defender’s Office to represent indigent clients.

And “Legalize,” spelled with a capital cannabis “L” says it all – legalize medical and recreational marijuana and end the racially biased enforcement of cannabis possession laws.

Order your buttons and t-shirts here.

The Trump administration wants applicants for federal jobs and contractor positions to divulge whether they have gone through diversion programs such as drug courts that are meant to help people avoid prison.

But critics say the move undermines the whole idea of sentencing alternatives that are designed to keep permanent blemishes off participants’ records, avoiding negative background checks that can limit jobs, housing and education.

The Oregonian: Many state residents can’t afford lawyers when they need them in the civil justice system.

The Lens: Judge rules lawsuit against Orleans Parish district attorney over fake subpoenas and arrest warrants can proceed.
Calling the use of fake subpoenas cited in the lawsuit an allegation of “systematic fraud,” federal Judge Jane Triche Milazzo on Thursday issued a ruling that rejected much of (DA Leon) Cannizzaro’s request that the case be dismissed.

Above the Law: California attorney general says journalists broke the law by getting, via open records, a list of convicted officers.

Reason: The lingering stench of marijuana prohibition.
Alcohol prohibition lasted 14 years. Marijuana prohibition has been with us almost six times as long. Police have arrested people for violating it about 20 million times in the last three decades alone. Many of those people were ultimately convicted of felonies that sent them to prison, although the vast majority were charged with simple possession and spent little or no time behind bars. Either way, marijuana offenders have had to contend with the lingering effects of a criminal record, which can shape people’s lives long after they complete their sentences.

Depending on the jurisdiction and the classification of the offense, people who were caught violating marijuana laws may lose the right to vote, the right to own a gun, the right to drive a car (for up to a year), the right to live in the United States (for noncitizens), and the right to participate in a wide variety of professions that require state licenses. They may find it difficult to get a job, rent an apartment, obtain student loans, or travel to other countries. They may even be barred from coaching kids’ sports teams or volunteering in public schools.
The employment consequences can be explicit, as with state laws that exclude people convicted of felonies from certain lines of work, or subtle, as with private businesses that avoid hiring people who have criminal records, possibly including arrests as well as convictions, because of liability concerns. “There is no limit to how much you can discriminate against a person with a criminal record,” observes Douglas Berman, a sentencing expert at The Ohio State University’s Moritz College of Law.

ABA Journal: Judge decries attacks on press as he dismisses libel lawsuit.
U.S. District Judge Mark Walker of the Northern District of Florida ruled Wednesday against University of Florida horticulture professor Kevin Folta in an opinion that criticizes politicians’ attacks on the news media. The Tallahassee Democrat has coverage.

“Given the current climate, it is important to recognize the critical nature of the privilege and the necessity of its expansive application,” Walker wrote. “Today’s environment has created a unique prism for defamation actions and the protections intended to ensure a free press. When politicians plan to ‘open up our libel laws,’ and then after winning elections, continue to pummel the press and decry anything unflattering as ‘fake news,’ it is clear that the Fourth Estate is under attack.”

The Badger Herald: Abuse at juvenile prisons must end.

Retrieved from http://www.milwaukeerenaissance.com/AdvocacyAtWork/FelonyCases
Page last modified on March 07, 2019, at 09:02 PM